Creating a Rock Hill for All

Back to All News

John Gettys (’09) was serving his second term on the Rock Hill City Council when he became a member of Liberty Fellowship’s fourth class.

“While participating in the seminars, I realized that I had to do more than what I was doing for Rock Hill, and it takes commitment and having patience until the time is right,” he said.

John decided not to run for a third term on City Council, and he waited for the opportunity to run for Mayor.

John was elected Mayor of Rock Hill on October 31, 2017, and took office the following January. One of the first things on his calendar was a strategic planning retreat with the city’s department heads and others.

John decided to send everyone attending the retreat The Ones Who Walk Away from Omelas by American writer Ursula K. Le Guin. The work of short, philosophical fiction is treasured among Fellows. It depicts a summer festival in the utopian city of Omelas, whose prosperity depends on the perpetual misery of a single child.

John was elected Mayor of Rock Hill on October 31, 2017, and took office the following January. One of the first things on his calendar was a strategic planning retreat with the city’s department heads and others. 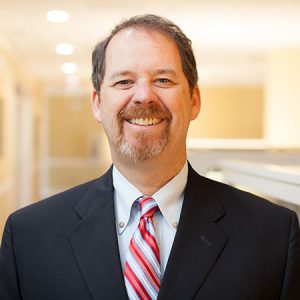 John decided to send everyone attending the retreat The Ones Who Walk Away from Omelas by American writer Ursula K. Le Guin. The work of short, philosophical fiction is treasured among Fellows. It depicts a summer festival in the utopian city of Omelas, whose prosperity depends on the perpetual misery of a single child.

“It set the tone, I think from the beginning that we were going to have a mayor who was going to be concerned about moving our community forward, but in the same respect, he was going to be very concerned with people individually and how they could all benefit from the changes that would be coming while he was mayor,” said Vehaun. 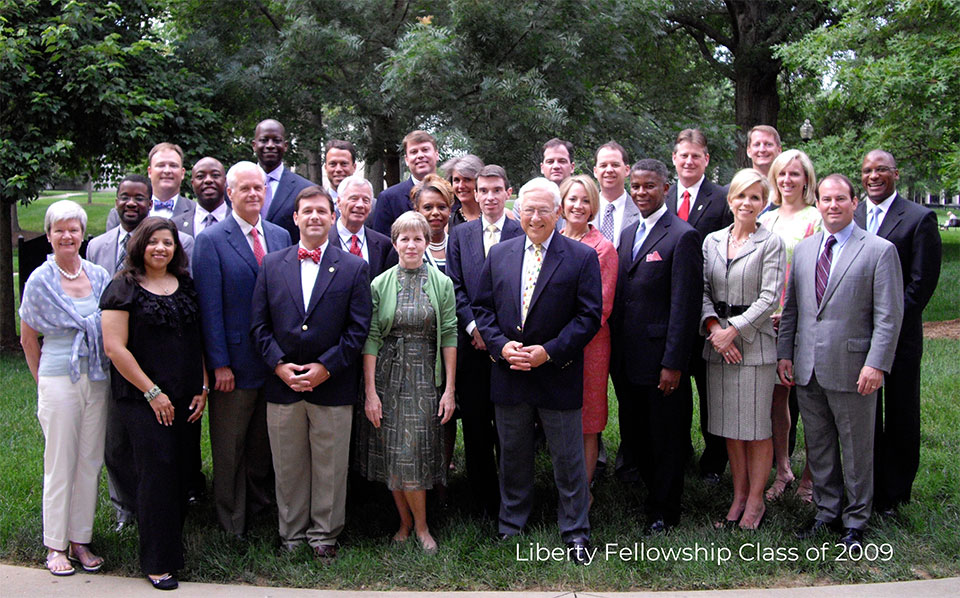 Rock Hill for All

If John’s first term could have a theme, it would be “Creating Rock Hill for All.” That theme begins with his approach to economic development.

Rock Hill is growing exponentially, and John’s concern is how to make the growth equitable so that all of his constituents benefit.

“When we’re anticipating over $4 billion of wealth coming into our community, I think it gives us an opportunity now as a community that we haven’t had, maybe in over a hundred years, to take that great economy and those great investments that are coming and be purposeful with how we can invest in all parts of our community and making sure that we see growth come to everyone,” said John.

“When we have new developers and want to come down and convert old buildings into apartments, or if they want to come in our downtown and build new apartments. John’s first question is, how many of those apartments are you going to dedicate to workforce housing for the people within the community that had the struggle to find housing?” said Vehaun.

Miracle Park, a Park that Functions for Everyone

n December 2019, the city began construction on Miracle Park. Designed for people of all abilities, the park is said to be the first of its kind in the nation.

Miracle Park will have two Miracle Fields, a state-of-the-art inclusive playground, two multi-purpose fields, and a retail space dedicated to employing people of different abilities. It is a public/private project between Winthrop University, the City of Rock Hill, and the York County Disabilities Foundation. 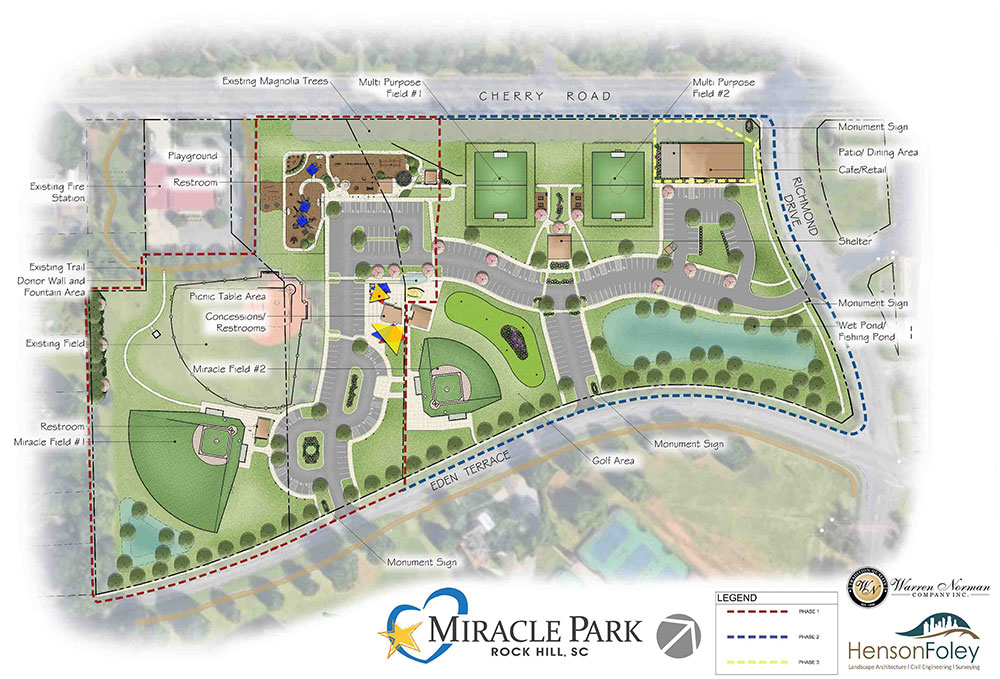 “Rock Hill is a community that since the 1980s is focused on sports tourism and bringing those from out of town to our town to play on world-class facilities, like the BMX Supercross side that hosts the world championships, Manchester Meadows where we’ve had soccer tournaments, the Carolina Panthers, who will be coming soon,” said John. “But the people of Rock Hill said that’s not enough. We need something that functions for everyone. That’s why I think Miracle Park defines us as community.” 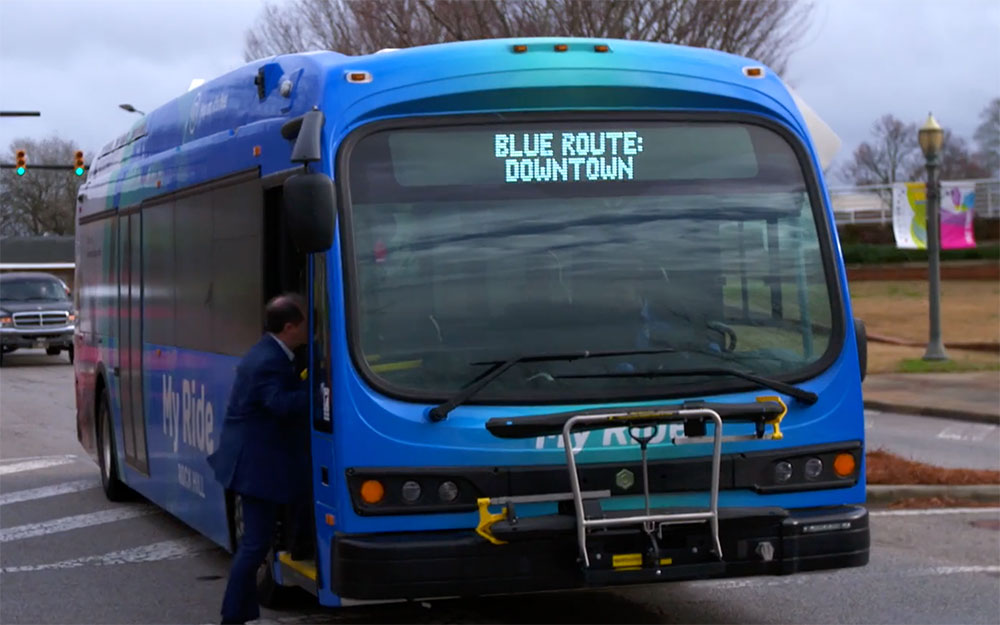 John oversaw the launch of a free, all-electric bus system called My Ride Rock Hill in 2019.

Elizabeth Owen, a Liberty Fellow from the Class of 2019 and a partner at John’s firm, says My Ride is making the city more accessible for everyone.

“This is new and innovative for us here in Rock Hill, and it’s provided people an opportunity for people to get to work, to be able to get to their doctor’s appointments, and shopping and for the city to be accessible for everyone. And that’s just one example among the many examples from John’s first term. I mean, it’s incredible,” said Owen.

John says the most rewarding part of My Ride is seeing how transportation expands economic opportunity.

“We had people getting on a bus from the men’s shelter and getting a job because they had transportation that was reliable,” said John. “To me that’s really the key to good economic growth. It’s not going out and landing the Carolina Panthers, although that’s great, it’s getting a hundred people to earn $5 more an hour today than they were earning yesterday and to continue on like that.”

No Room for Racism

When the killing of George Floyd and Breonna Taylor occurred this year, the people of Rock Hill responded with several peaceful protests.

“We look at serving and helping people, and “Why did that happen? How could it happen? Why didn’t somebody else stop it? Why didn’t one of the other officers stop it?” That was the conversation here, because you go back with the officers on patrol or patrol shifts, and talk about it,” said Watts.

John and Chief Watts received a lot of calls and emails from community members wanting more information about policing in Rock Hill.

“I think the first thing, especially with the community was just talking, being available. We had the mayor’s office on with my office, had a lot of e-mails, phone calls of, “How do we police here? Could that happen here? Are you taking steps to prevent that?” said Chief Watts.

To collectively reassure the community, John and Chief Watts came together for a public conversation streamed live and moderated by Apostle Seth Crosby, a pastor and police department chaplain. During the conversation, Chief Watts clearly stated that choke holds are prohibited in the department and talked extensively about policy and tactics.

To give citizens more of an ongoing voice in the policing process, Rock Hill City Council voted in September 2020 to create a Citizens Review Board.

“My hope is that the Citizens Review Board will look into policies that we have in the police department and otherwise, and make recommendations about how maybe that might be more transparent or more inclusive,” John said. “It was very important for us to do in Rock Hill and Chief Watts was very positive in seeing that created.” 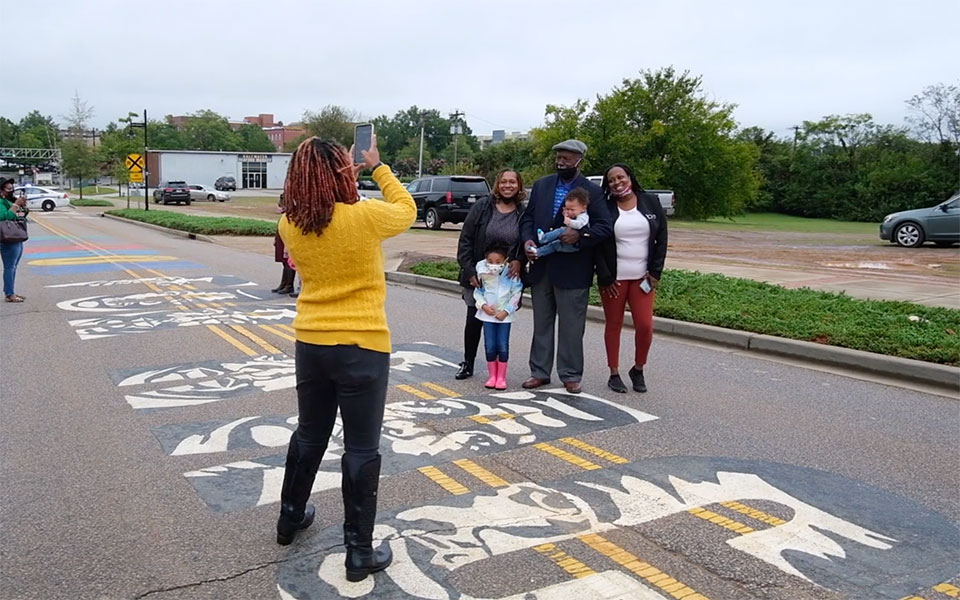 Coming Together Through Art

The people of Rock Hill are also coming together through art. A group of young citizens and business owners organized the painting of a mural with the words “No Room for Racism” on White Street in the downtown area. The designer of the mural is a local dentist, and community members participated in painting the letters.

About 25 years ago, John was a member of the group that drafted a resolution for the slogan “No Room for Racism” and successfully advocated its passing. You can still see the phrase on some official signage in the city.

“We went around to subdivisions, the county, the city, we went to businesses and we asked them to sign on to this resolution. That just said in our community, there is no room for racism. Doesn’t mean it’s not here, it means that it’s not wanted here, and we can all be committed to doing things to help,” John said.

On September 23, the “No Room for Racism” mural was dedicated to the Friendship 9, a group of college students who started the “jail no bail” aspect of the civil rights movement in Rock Hill. Their 9 faces are painted in the mural inside the letters of the word “Racism.”

“The Civil Rights Movement is not something that’s over, it’s something that’s just transformed….and so I’m hopeful that the art that we’re seeing already in Rock Hill and that we see coming will help continue to bring us together to talk about that,” said John.

Swing for the Fences

John is optimistic about what he has been able to accomplish in his first term, but he says it’s too early to tell whether the challenges of 2020 have made the community stronger. He continues to draw upon his Liberty Fellowship experience, his relationships with other Fellows and readings to help guide him.

“It’s been 10 or 11 years since I was fortunate enough to go through the program, and I think about it all the time. I mean, you just can’t not be in a position where you’re trying to lead a community and not think about your Liberty experience,” John said.

“We can’t be passive in our state anymore. We have to be straightforward, we have to be aggressive and we have to be willing to swing for the fence every now and then. We haven’t done that enough as a state. And I think what Liberty did for me is it helped cement that confidence that we all need to recognize you got to take your shot.”