The Digital Divide in South Carolina

Back to All News
3 years ago 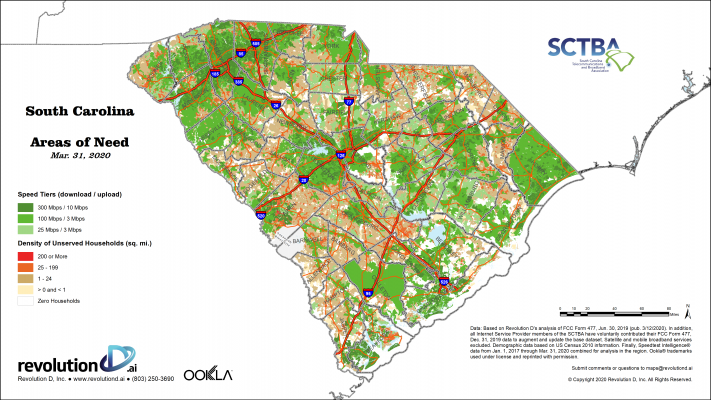 SPARTANBURG, S.C. (WSPA) – Hundreds of thousands of South Carolinians don’t have internet fast enough to do what they need, or have no internet connection at all.

The pandemic exposed the digital divide in South Carolina that is cutting off students and teachers from critical connections.

Kandace Tucker’s doing all she can during the pandemic to encourage her students virtually. Tucker, a Broome High School AP Calculus teacher, even delivered t-shirts to her socially distanced seniors.

But she tells 7 News anchor Amy Wood there’s one thing she can’t fix.

“I can Zoom from my house, but the more people that get on it, I guess the greater bandwidth it takes up, and there’s just so much of a delay and so much buffering that we can’t get anything done,” Tucker said.

A strong high-speed connection isn’t far away from her home in Pacolet.

Tucker said “I live 937 feet from the Spectrum line, it comes all the way down my street and stops three houses from my house.”

Tucker’s tried to get them to come farther. This Broome teacher of the year said in her most recent conversation with the provider, she was told her she wasn’t worth it. Tucker then tweeted that to the top educator in the state, Superintendent of Schools, Molly Spearman.

Tucker said, “I just sent it just before I went to bed one night. I was angry and she saw it and she reached out to me and she was very very angry, she was hot.”
7 News anchor Amy Wood asked Spearman about getting annoyed, and she told Amy, “I did, I did, because I live rural area and thankfully my electric cooperative, Mid-Carolina, worked on broadband and has brought broadband into our very rural community.”

Spearman’s husband tweeted a picture to Tucker, which showed Spearman on the phone with the provider, trying to get answers and action.

“A lot of families say ‘look I would pay if I could, but I don’t have access to the service.’ This is a long problem that has been in South Carolina, we need to address it. I think this pandemic has brought it to the forefront because it’s not only education Amy, its K-to-12, its college students, its healthcare, its mom and dad needing to apply for a job or unemployment and they can’t do it,” Spearman said.

Tucker says her students struggle to connect too.

“My kids don’t have good enough internet, so what I’ve started doing is putting everything up for the week on Monday. Then sometime during the week they’ve been going somewhere where they could get good internet and get all their work done for the week at one time,” said Tucker.

He believes there are 435,000 South Carolinians, roughly one in every ten, who can’t connect.

Stritzinger is working with the broadband providers to map the gaps in South Carolina so they can create the missing connections. Right now the only maps are FCC maps that are years out of date.

Stritzinger said “We can see where their networks end, and we can get creative extending from existing networks to homes that are in need.”

He continued, “It’s a big challenge. There are some short term things we can do to improve wifi connectivity and things like that, but longer-term we have to bring federal dollars into the community. I mean that’s the way you really fix it.”

“We gotta be creative, and the fastest way to fix the problem is to extend existing infrastructure. If we have to build brand new stuff starting from zero it takes a long time to get the money,” according to Stritziner.

“If I wave my magic wand, I am hoping we can connect every South Carolina citizen in five years,” he said.
Superintendent of Education Molly Spearman said “You can bet I’m gonna be at the table talking about this and doing what I can to help move this issue along forward.”

As for Kandace, she found out thanks to Spearman’s inquiry the provider decided to re-evaluate the teacher’s request to extend the line.

Tucker said “I don’t know what’s going to come of it, we may still not be worth it to them, but we should be. I feel like we should be worth it to them.”
When 7 News asked for comment, Spectrum let us know they would be connecting Kandace Tucker and eight other families on her street as soon as they can put in the line.

As South Carolina families who struggled to connect to the internet, Stritzinger suggests you run speed tests. On wifi, and off-wifi, testing the mobile systems too.
The website Speedtest.net shares every test you run with him, and those results are powering the maps that help South Carolina make the case, eventually to the federal government, for the funds it will take to improve things.

By helping to map the problem, Stritzinger said, we all become part of the solution.