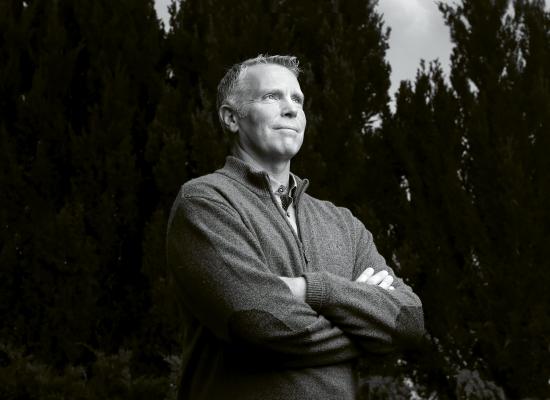 If you’ve lived in Greenville for any length of time, you no doubt recognize Carl Sobocinski—at least by name, if not by face. Maybe you’ve spotted the restaurateur with the twinkling blue eyes shopping with his daughters at the TD Saturday Market, which he helped establish 17 years ago; chatting with customers at one of his seven downtown restaurants; or perhaps socializing at Euphoria, the annual food, wine, and music festival he founded with singer/songwriter Edwin McCain in 2006.

“I always say that whatever work I do, I want it to be impactful and meaningful,” Carl tells me, and to say the New Hampshire native has made a difference in his adopted city doesn’t begin to cover it. To date, his Table 301 Restaurant Group has donated more than $2 million to the community. Through Local Boys Do Good, the nonprofit that he and McCain formed in conjunction with Euphoria, Sobocinski has distributed $347,000 worth of grants to area charities. He even reached beyond the community in 2005, when he established Brunch for a Cause to help victims of natural disasters like Hurricane Katrina. More recently, Carl has spearheaded an effort to provide subsidized housing for hospitality workers, and has given out more than 16,000 meals to those in need in the Upstate through Connect for Good, his new project with software consulting company Advoco Inc.

A Passion for People

But for a need of extra cash during his junior year at Clemson, where he was pursuing a degree in architecture, Sobocinski’s path would have taken a different turn. In the spring of 1989, a lack of funds prevented the student from joining his buddies on spring break. A few friends who were staying on campus and working at Keowee Country Club suggested Carl come work with them. “So they introduced me to their manager, I filled out an application, and he hired me on the spot,” the restaurateur reminisces. “I got a job as a busboy, and worked my way up to waiter, bartender, and eventually, manager.”

That experience whetted the young man’s appetite for the hospitality industry, and by the time he graduated from Clemson, architecture no longer enticed him as a career. By then he had risen to the rank of food and beverage director at the Keowee Country Club, and he was hooked by a passion for people that was best served in restaurants. In 1993, he became a partner in Greenville’s 858 restaurant, and four years later he opened Soby’s New South Cuisine in a renovated mid-nineteenth-century building in downtown Greenville with chef and partner David Williams. At the time, putting a restaurant on the south end of Main Street was a risky move. “We were bold and willing to come down here,” Carl says. “We had the foresight that the city would grow up around us.”

Chef Rodney Freidank, corporate chef for Table 301, who has worked with Sobocinski since 1994, maintains that his boss has always treated him—and the rest of his team—like family. “The most important thing about Carl is that he genuinely cares about our customers and about our staff,” Freidank declares. From giving a young aspiring chef a tour of the kitchen, to helping a team member who has fallen on hard times, Table 301’s founder does his darnedest to make people feel appreciated. “If Carl can touch someone and make their life better, he just does it,” the chef shares. “It doesn’t matter if it’s through food and beverage or by mentoring them and giving them inspiration.”

That generosity extends to his alma mater, where Sobocinski has donated not only money but time, teaching classes and speaking to students about entrepreneurship. In 2019, he established the Carl S. Sobocinski ’90 Scholarship Endowment at Clemson’s College of Business. “I’m a big fan of Carl’s,” crows university president James Clements, who considers the restaurateur a friend. “He’s a selfless guy with a big heart. Service is an integral part of who Carl is.”

Between his participation on boards, community projects, and the Euphoria festival, Sobocinski estimates he spends about a third of his time on philanthropy. And that doesn’t count the responsibility of having two daughters, ages 12 and 15. “That’s the other two-thirds of my time,” he notes with a laugh. When I ask him why it’s so important to give back to his community, he refers to a passage he read that morning in Dare to Be Uncommon Every Day, a book of daily devotions by former NFL coach Tony Dungy: “To those who much is given, much is expected.” It’s a philosophy that spills over to his staff. Through Carl’s encouragement, Table 301 employees volunteer an average of 3,200 hours of community service each year.

That’s also the message he imparts to his daughters. “We talk a lot about kindness and treating others the way you want to be treated. I tell them if you’re in school and you see someone sitting in the cafeteria alone, go and sit with them. Be the example and be the leader that recognizes that everybody is important and everybody needs to feel valued.”

Grounded in a Catholic upbringing and his Christian faith, Sobocinski has reached an enviable place in his life. “I’m very comfortable in where I am, who I am, and what I’m doing,” he states. “And being a dad is my most important job and responsibility.” This July, Carl added to that responsibility when he married Karen Lopez Jordan and gained a 12-year-old stepdaughter in the process.

Rising to the Challenge

Despite the trials of being a restaurant owner during the pandemic, Carl remains optimistic. “This year has put us to the test and it’s challenged us,” he says. “But it’s done so many positive things . . . like draw us closer to the people around us. We have to make sure that when this is over, we don’t forget all those important lessons we learned . . . and maybe live our lives a little more intentionally.”

During the early months of the COVID-19 quarantine, he began writing down what was on his mind and heart, based on daily devotional readings. “I would send [the letter] to the [Table 301] leadership team and ask them to forward it to our customer base.” As positive feedback came pouring in, he was inspired to continue sending missives as a way to lead during a tough time. “Carl’s letters lifted people’s spirits and reminded them of what’s important,” reports Freidank. Rather than dwell on the difficulties, which included having to furlough 85 percent of his staff this past spring, Carl encouraged folks to reach out to those who needed help.

Ask Sobocinski what his proudest professional accomplishments are, and he’ll tell you about the program he’s set up to help Table 301 associates become independent business owners. He hopes to leave behind a series of successful restaurant operators—such as Jorge Barrales at Papi’s Tacos and Michael Kramer at Jianna—as he sets the table for the next generation of chefs and entrepreneurs. After nearly three decades of living and doing good in Greenville, Carl has garnered a bevy of awards, including The Order of the Palmetto, the highest civilian honor granted by the State of South Carolina. Although both this accolade and the Visionary Leadership Award recognize lifelong service to others, Sobocinski insists he is far from finished.

“I don’t think of myself as being as old as I am,” the 52-year-old confesses. “And I don’t think of myself as having accomplished enough yet, though I’m deeply honored to receive the Visionary Leadership Award. I’m happy that our work has been meaningful, and this just gives me more inspiration and drive to continue making a difference every day.”